Like all great discoveries in history, this was an accidental one :-) 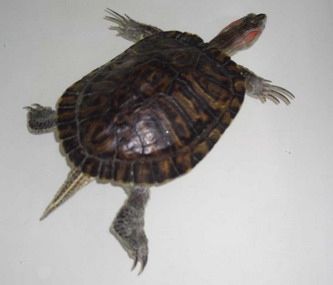 We got him out of pity in 2000 when he was 15 years old; his owner was sick and tired of him and ready to release him into the wild. We figured he’d be dead (a little defenseless aparment turtle, with all those predators out there ) in a couple of days, so we took him in. That makes him 22. Red Eared Sliders live approx. 15 years in the wild, up to 30 in captivity. So 22 means he is pretty “mature”, and I don’t mean to sound inconsiderate, but it shows. He used to love my son’s closet, but for about 1 year now has chosen a new favourite location: the space around the toilet (*sigh* I know, bizzare, but “de gustibus non discutandum”). Red Eared Sliders hibernate in winter, but are quite active during the rest of the year.

He became a high-maintenance turtle, we spoiled him rotten: he got to eat the best fish money can buy, since that’s all he eats. Try to feed him anything else and he’ll give you this deeply offended look: “Do you really expect me to touch THAT??? Have you lost your mind, by any chance?”

Well, Jesse spent the last 3 ½  years of his life sleeping most of the time. I had to force him to eat, and he would only do so with great difficulty and no enthusiasm whatsoever. We were worried, and since he is a member of the family, we took him to the vet (he slept his little head off all the way there and slept through most of the examination). The result was not good: “he’s old, sooooo – expect the worst. His system is shutting down”. My son and I were not happy at all – we love him.

Since the bathroom is the place he resides now, I must clean it VERY often, and I mean disinfect-type-of-clean. One day, a while after I started taking Iodine, I decided to use some to disinfect the bathroom floor. I usually clean everything with Vodka, to the sheer desperation and outrage of my Russian friends. I made a solution of castille soap, water, and I added a hefty dose of Iodine, proportionate to the amount of water used. I tossed Jesse out of his residence, and started cleaning. A couple of minutes later he came running, yes, running, stopped smack in the middle of the bathroom and extended his head fully, touching the wet floor, sniffing, sniffing, sniffing! I was watching him, totally fascinated. I’ve never seen him do anything like that before. His little body language was screaming: I LOVE this stuff!!!!

To make a long story short, next time I fed him (they don’t produce saliva, so can only eat in water), I put one drop of Iodine in the water and put him in. I figured, if he looks distressed, I’ll take him right out and hope he’ll survive. Instead, he did what you see in the pic: extended all his limbs completely, fully relaxed, and seemed to be in Turtle Heaven. He spent a LOT of time in that state. I noticed an almost immediate increase in his apetite and energy level. Next feeding time, I increased the dose to 2 drops. This has been going on for a few months now. Results:

*He SHEDDED his entire skin and was the ugliest little thing you’ve ever seen while that happened. It took him about 6-8 weeks to shed the old skin. He looks amazing now, much younger then when we got him 7 ½ yrs ago, I kid you not!

*He is very energetic, roams the entire place, comes running to meet us when he hears the door, watches TV with us, begs to be put on the coach. (He must have been a dog in a previous life).

*He eats a lot now, has a voracious apetite. I should take a video and put it in YouTube, he’s hilarious, you wouldn’t expect that sort of eagerness to get food from a turtle!

*He seems to have discovered a new zest for life, follows us like a puppy around the house, and begs for TLC. We give in and play with him: my son and I lie on the floor and toss a paper ball between us, while Jesse is chasing it! It’s so funny!

He’s still on 2 drops and loving it. He’s getting more active and younger all the time.

Hope you enjoyed Jesse’s story! (I wanted to post this also in the Pets Forum, maybe Iodine could help some other pets, but I don't know how to do it)