jimstone is on it with info i can vouch for!

THE SHOOTING IS A FABRICATION. I CAUGHT THIS EARLY ON WITH PROOF. CLICK HERE FOR THE PAGE THAT HAS IT ALL NEAR THE TOP

I am going to let it roll down this page.FACT: GUNS CAUSE VIOLENCE LIKE CAMERAS CAUSE KIDDIE p 0 r n.
They can't force everyone to get the next shot without gun control!
The Monkey pox vaccine is READY TO GO!!! Make sure you get boosted.
A reader sent:
Jim, my youngest son (who is 19 years old now) went to elementary, middle and high school in TX. Three different cities.

By the time 2014 rolled around, ALL schools in our area had been retrofitted (and new schools designed with) buzz- in systems, where you could not walk into the school without being buzzed in by the front office. Parents would literally have to give their name, the name of their student, and the reason for their visit. You would sit outside and wait a couple minutes while the administration and staff verified that your student was a real student at the school.

Once inside, the only place accessible to any visitor was the front office. There was bulletproof glass and / or heavy locked doors leading to all other areas of the school, and this was at multiple schools throughout the years that my son attended. All schools were designed this way! It was done intentionally to stop mass shootings.

There is no way that in 2022 the shooter had access to a classroom.

My response: Of course not. He never made it out of the parking lot. As you probably read, thanks for this confirmation. For everyone else, keep reading. This shooting was fake no ifs or buts. 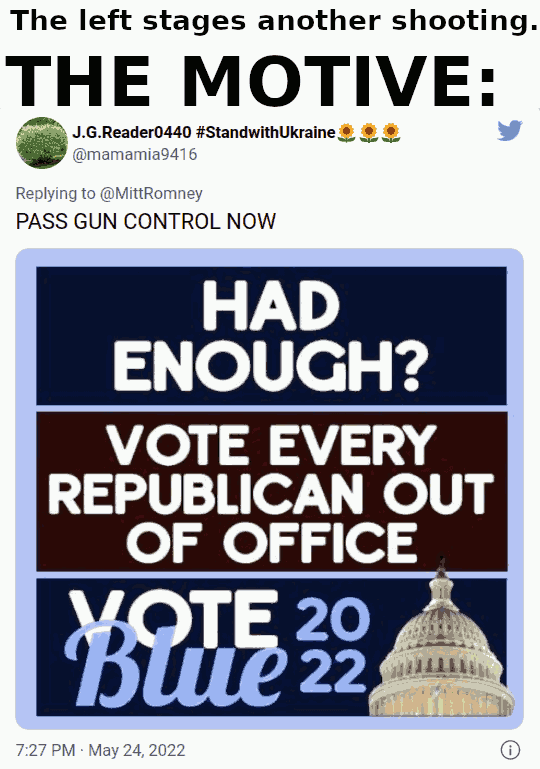 THE SHOOTING IS A HOAX. I HAVE A LUCKY EARLY CAPTURE THAT SAID IT LIKE IT HAPPENED. HOW DID THEY GO FROM THE HAND GUN SHOOTER WAS SHOT BY CONCEALED CARRY IN THE PARKING LOT WITH NO ONE ELSE SHOT TO 21 DEAD and an AR???? It's called A GUN CONTROL BILL IN CONGRESS DURING DAVOS.
But first this little tidbit. Some are saying this is not him, but early on this is who they said it was until he was swapped out for the guy with an AR15. I'll go with this, since the earliest news reports said he was trans and upset with the way he was treated. It's possible to get one or two details wrong, but when the original story was a trans with a hand gun who was mad about being disenfranchised and got shot by concealed carry in the parking lot where he was stopped I am having a hard time with a total flip to not trans with AR15 that went into the school. Sorry. Actually no. Not sorry. I know the agenda. The following tweet was posted HOURS after I knew this guy was trans. 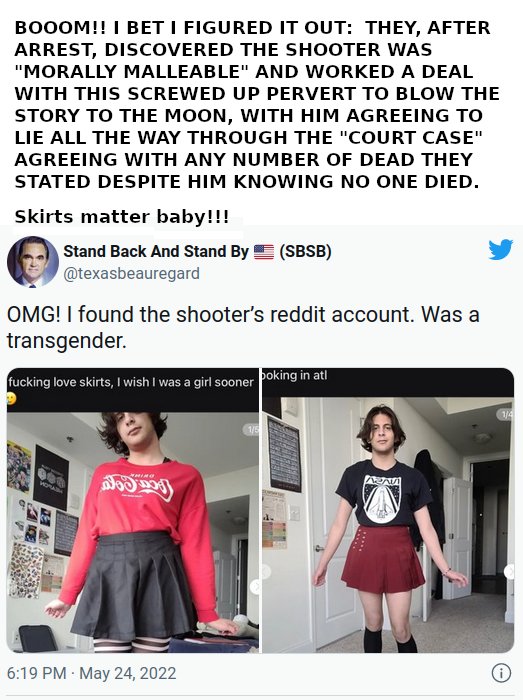 THE ORIGINAL STORY OUT OF TEXAS
Disgruntled LATINO TRANS teenage nutcase pulls up to school, shoots one round from a hand gun and is then shot by concealed carry IN THE PARKING LOT. It ended RIGHT THERE, IN THE PARKING LOT.
Anything else they spew is just another Sandy Hook. That was the FIRST STORY, where in the hell did 21 dead come from??? I was ignoring this because even an hour into it only the shooter got nailed and the story ended in the parking lot. So I figured the story would die and I ignored it only to find out some assinine gun grab pervert decided to launch.
SEE THIS: 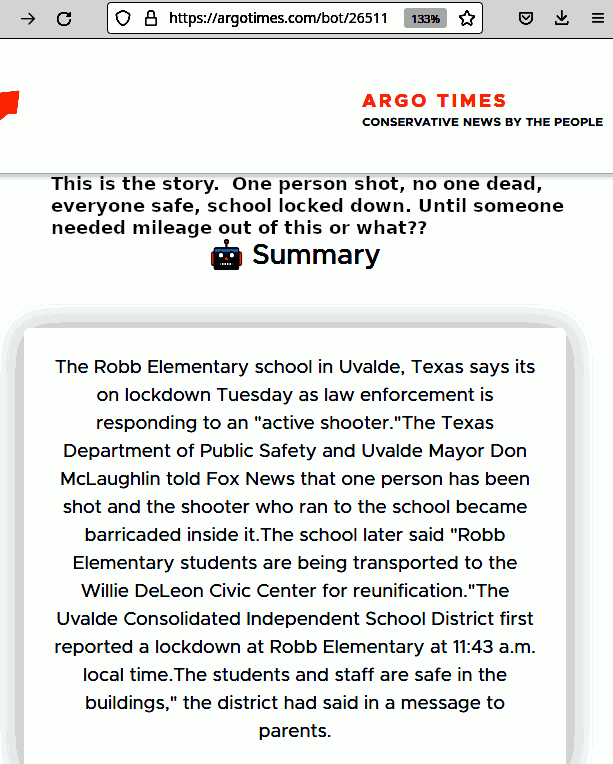 Actually that's not the ABSOLUTE ORIGINAL story, the ORIGINAL was that it was stopped IN THE PARKING LOT, there was no one "running to the school". But at least this release said everyone was safe with only one person shot, omitting the fact that the one person shot was the original shooter. Taken out by concealed carry.
THAT is the story. Anything more is a "Sandy Hook"!!