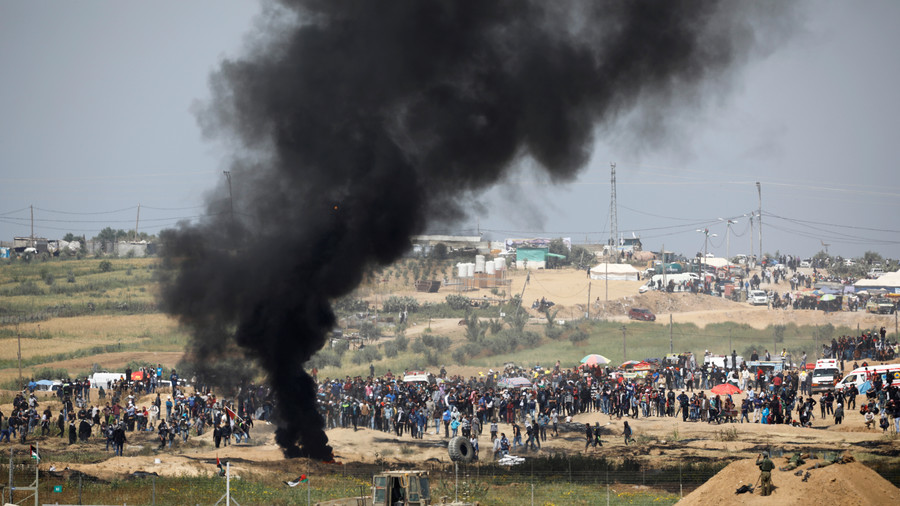 Israeli soldiers are seen next to the border fence on the Israeli side of the Israel-Gaza border, as black smoke rises while Palestinians protest on the Gaza side of the border. April 6, 2018. © Amir Cohen / Reuters
Violence has broken out at the Gaza-Israel border as the Great Return March protests enter their second week, with two Palestinians confirmed killed and dozens injured by Israeli Defense Forces fire.

The Palestinian Red Crescent earlier confirmed the first death as that of a 38 year old man, telling RT.com: "PRCS teams provided first aid to 81 injured in Gaza strip; 36 out of the total number are live bullets injuries.” Three of those are serious injuries to the chest and head.

The IDF launched tear gas and opened fire on protesters in the northern Gaza Strip, east of Jabaliya, Haaretz reports, with Israel deploying snipers and tanks along the border as protests gain traction. Palestinians have burned tires during protests in an effort to obstruct the view of Israeli snipers, while Israel says the smoke could hide terrorists.

RT’s live feed overlooking Shijaiyah in east Gaza shows thousands of Palestinians gathering behind a cloud of black smoke as the IDF fires tear gas into the crowd. A number of ambulances are at the scene.