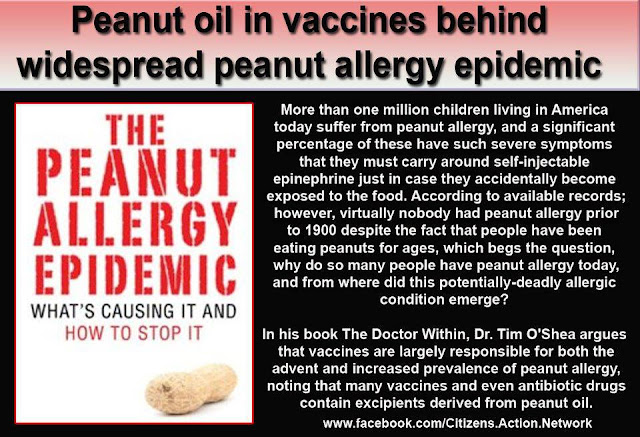 
Have you read The Peanut Allergy Epidemic by historian Heather Fraser?  She begins by asking us why the peanut allergy epidemic is only found in Western cultures, where at least 4 million people experience the mysterious phenomenon, yet there are virtually no reported cases in India, where peanuts just so happen to be the main ingredient in most baby food products.


Related 10 Vaccine Facts Everyone Should Know | That The Mainstream Media Still Refuses To Report Consider this: one century ago, you couldn't find anyone allergic to peanuts, but now it's commonplace for parents to send EpiPens to school for the teacher and nurse to keep near to their children, just in case someone so much as opens a snack in the room that contains peanuts, or even if someone opens a food product that was so much as manufactured in "a facility that processes peanuts." What's wrong with the human body that it would go into anaphylactic shock from a seemingly harmless food ingredient that couldn't harm a soul a hundred years ago?

Today, peanuts cause the most common severe food allergy reactions, and are the number one cause of death from food reactions, and for good reason: Peanut oil was never meant to be put in a syringe and injected into muscle tissue. Peanut oil is a non-stated, hidden ingredient in children's vaccines Back in 2010, one family had their 6-month-old child taken away from them and were accused in court of shaken baby syndrome, until their attorney presented corroborating medical information about the child's anaphylactic reaction and swelling around the baby boy's brain (subdural hemorrhages) that occurred as an immediate response to vaccinations.

Which vaccines were those, you may be wondering? DTaP, Prevnar7 (pneumococcal) and Rotateq (Rotavirus vaccine). Guess what? The administered vaccines contained unlabeled peanut oil, which was used as an adjuvant, but was not listed on the vaccine inserts. The doctor basically proved to the court that the child's allergic reaction to having peanut oil injected by vaccine had caused the massive brain swelling reaction that sent the boy into shock. False medical theory: The stronger the allergic reaction to vaccine ingredients, the longer the immunity lasts


Related Human Fetal DNA Fragments In Vaccines Are A Possible Cause For Autism – According To This Stanford Scientist
In the mid-1960s, peanut oils were first introduced into vaccines because scientists hypothesized they could "prolong" immunity. Somehow, they thought, the oil would act as a time release capsule. Within 20 years, peanut oil was the preferred "excipient" – meaning a substance formulated alongside the active ingredient of a medication for the purpose of long-term stabilization. The dangers of its use, however, were well-documented. The problem? Doctors and scientists had lumped immune response with immunity, making a grave mistake that's still assumed to be true today. The myth is that the greater the allergic response to the vaccine, the greater the immunity that is conferred. Wrong! Today, anyone who challenges this myth is referred to as anti-science, anti-vaccine and a conspiracy theorist. There is no faster way for a doctor to lose their license to practice medicine than to challenge this commandment of vaccine mythology.


1980 to 2016: Correlating the massive surge in severe childhood allergies When did these childhood allergies experience a massive upsurge in number? Answer: When the mandated schedule of the number and frequency of vaccines for children under age 7 doubled, and then tripled. Take a look: 1980 – 20 vaccines 1995 – 40 vaccines 2016 – 70 vaccines What's the easiest way to send a child's body into anaphylactic shock and create severe food allergies for the rest of his/her life? Inject intact proteins from peanuts, eggs and dairy (casein) products directly into the infant's muscle tissue 36 times before the age of 18 months. When normal food becomes extremely toxic to children, the parents should review how those specific ingredients have been introduced to their infant's bodies, and what other dangerous "trace amounts" of carcinogens, antibiotics, adjuvants, emulsifiers, preservatives, additives, brewing agents, carriers and "immune response stimulants" are being injected into the body repeatedly for no logical reason. Vaccines have never been proven safe or effective; only studies done by the manufacturers themselves, which have subsequently been proven fraudulent, altered and skewed, are published in order to fool the public. Do you really know what's in most vaccines? Have you ever read the ingredients, warnings, reactions and the documented side effects on a vaccine insert? Here is a summary of the most dangerous vaccine ingredients, for your convenience: 1. Bovine cow serum: Extracted from cow skin. When injected causes connective tissue disorders, arthritis and lupus; also shortness of breath, low blood pressure, chest pain and skin reactions. 2. Sorbitol: Synthetic sweetener which metabolizes very slowly and aggravates IBS and gastrointestinal issues. 3. Hydrolyzed gelatin: Derived from the collagen inside animals' skin and bones. Injecting gelatin poses the risk of infection from synthetic growth hormones and BSE infectivity (mad cow disease). 4. Sodium chloride: Raises blood pressure and inhibits muscle contraction and growth. 5. Egg protein: Vaccines are prepared in eggs (certainly not organic). May contain growth hormones, antibiotics, and salmonella bacteria. 6. Casein: Also known as cow's milk protein, many children experience severe allergic and life-threatening reactions to traces of casein, commonly found in the DTaP vaccine. 7. Thimerosal: A neurotoxic mercury which causes autism: There are 25 mcg in one average flu vaccine, and the EPA safety limit is 5 micrograms, so children who are vaccinated simultaneously with multiple vaccines receive over 10 times the safety limit of mercury in one day. 8. Human albumin: The protein portion of blood from pooled human venous plasma; when injected causes fever, chills, hives, rash, headache, nausea, breathing difficulty, and rapid heart rate. 9. Formaldehyde: Highly carcinogenic fluid used to embalm corpses. Ranked one of the most hazardous compounds to human health; can cause liver damage, gastrointestinal issues, reproductive deformation, respiratory distress and cancer. Peanut oil? Enough said! Source and references: Naturalnews.com; TheDoctorWithin.com; NCBI.NLM.NIH.gov; VacTruth.com